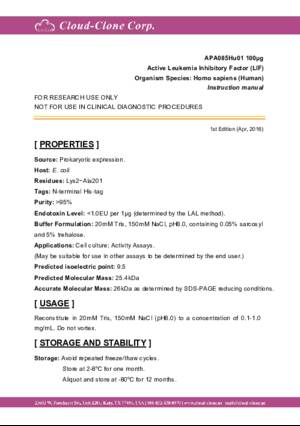 Figure. Cell proliferation of TF-1 cells after stimulated with LIF.
Leukemia Inhibitory Factor (LIF), is an interleukin 6 class cytokine that affects cell growth by inhibiting differentiation. Other properties attributed to the cytokine include: the growth promotion and cell differentiation of different types of target cells, influence on bone metabolism, cachexia, neural development, embryogenesis and inflammation. p53 regulated LIF has been shown to facilitate implantation in the mouse model and possibly in humans. To test the effect of LIF on cell proliferation, TF-1 cells were seeded into triplicate wells of 96-well plates at a density of 5,000 cells/well with 1% serum standard 1640 including various concentrations of recombinant human LIF. After incubated for 72h, cells were observed by inverted microscope and cell proliferation was measured by Cell Counting Kit-8 (CCK-8). Briefly, 10µL of CCK-8 solution was added to each well of the plate, then the absorbance at 450nm was measured using a microplate reader after incubating the plate for 1-4 hours at 37℃. Proliferation of TF-1 cells after incubation with LIF for 72h observed by inverted microscope was shown in Figure 1. Cell viability was assessed by CCK-8 (Cell Counting Kit-8 ) assay after incubation with recombinant LIF for 72h. The result was shown in Figure 2. It was obvious that LIF significantly increased cell viability of TF-1 cells.
(A) TF-1 cells cultured in 1640, stimulated with 0.5ng/mL LIF for 72h;
(B) Unstimulated TF-1 cells cultured in 1640 for 72h. 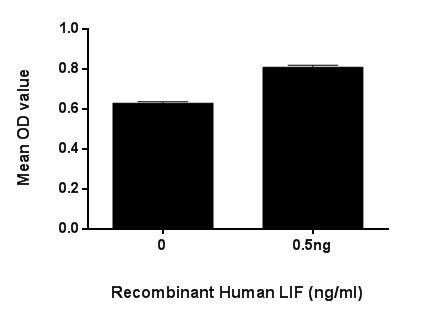 Figure. Cell proliferation of TF-1 cells after stimulated with LIF.