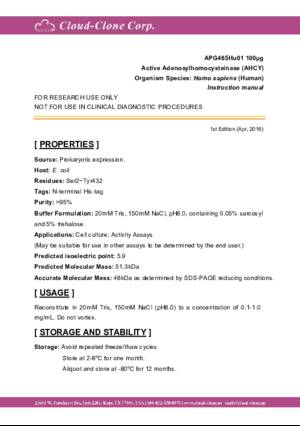 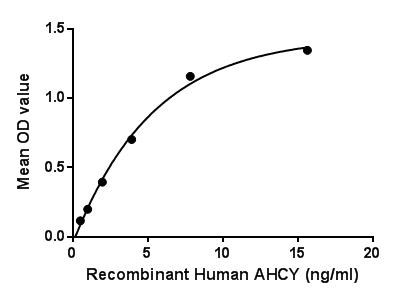 Figure. The binding activity of AHCY with MHCB.
Adenosylhomocysteinase (S-adenosylhomocysteine synthase, S-adenosylhomocysteine hydrolase, adenosylhomocysteine hydrolase, S-adenosylhomocysteinase, SAHase, AdoHcyase, AHCY) is an enzyme that converts S-adenosylhomocysteine to homocysteine and adenosine. The enzyme contains one tightly bound NAD per subunit. Besides, Major Histocompatibility Complex Class I B (MHCB) has been identified as an interactor of AHCY, thus a binding ELISA assay was conducted to detect the interaction of recombinant human AHCY and recombinant human MHCB. Briefly, AHCY were diluted serially in PBS, with 0.01% BSA (pH 7.4). Duplicate samples of 100uL were then transferred to MHCB-coated microtiter wells and incubated for 2h at 37℃. Wells were washed with PBST and incubated for 1h with anti-AHCY pAb, then aspirated and washed 3 times. After incubation with HRP labelled secondary antibody, wells were aspirated and washed 3 times. With the addition of substrate solution, wells were incubated 15-25 minutes at 37℃. Finally, add 50µL stop solution to the wells and read at 450nm immediately. The binding activity of AHCY and MHCB was shown in Figure 1, and this effect was in a dose dependent manner.