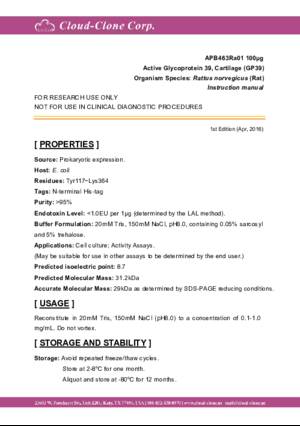 Figure. Cell proliferation of spleen cells after stimulated with GP39.<br/>Glycoprotein 39, Cartilage (GP39) also known as Chitinase-3-like protein 1 (CHI3L1), YKL-40 is a secreted glycoprotein that is approximately 40kDa in size that in humans is encoded by the CHI3L1 gene. GP39 may play a role in tissue remodeling and in the capacity of cells to respond to and cope with changes in their environment. Plays a role in T-helper cell type 2 (Th2) inflammatory response and IL-13-induced inflammation, regulating allergen sensitization, inflammatory cell apoptosis, dendritic cell accumulation and M2 macrophage differentiation. Facilitates invasion of pathogenic enteric bacteria into colonic mucosa and lymphoid organs. To test the effect of GP39 on cell proliferation, rat spleen cells were seeded into triplicate wells of 96-well plates at a density of 5,000 cells/well with 2% serum standard 1640 including various concentrations of recombinant rat GP39. After incubated for 96h, cells were observed by inverted microscope and cell proliferation was measured by Cell Counting Kit-8 (CCK-8). Briefly, 10µL of CCK-8 solution was added to each well of the plate, then the absorbance at 450nm was measured using a microplate reader after incubating the plate for 1-4 hours at 37℃. Proliferation of spleen cells after incubation with GP39 for 96h observed by inverted microscope was shown in Figure 1. Cell viability was assessed by CCK-8 (Cell Counting Kit-8) assay after incubation with recombinant GP39 for 96h. The result was shown in Figure 2. It was obvious that GP39 significantly increased cell viability of spleen cells.(A) Spleen cells cultured in 1640 stimulated with 10ng/ml GP39 for 96h; (B) Unstimulated spleen cells cultured in 1640 for 96h. 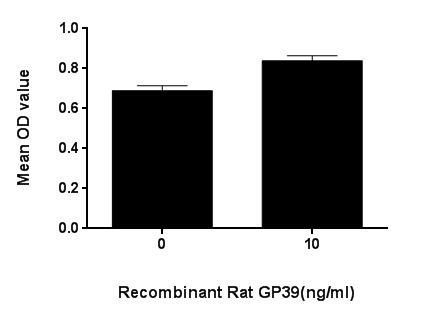 Figure. Cell proliferation of spleen cells after stimulated with GP39.