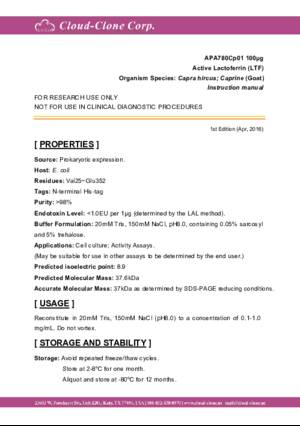 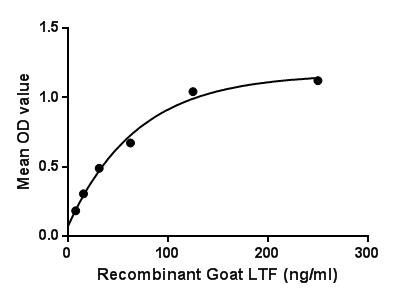 Figure. The binding activity of LTF with CLU.
Lactotransferrin (LTF), also known as actoferrin (LF) , is a multifunctional protein of the transferrin family. Lactoferrin belongs to the innate immune system. Apart from its main biological function, namely binding and transport of iron ions, lactoferrin also has antibacterial, antiviral, antiparasitic, catalytic, anti-cancer, and anti-allergic functions and properties. LTF is widely represented in various secretory fluids, such as milk, saliva, tears, and nasal secretions. It also present in secondary granules of PMN and is secreted by some acinar cells. Besides, Clusterin (CLU) has been identified as an interactor of LTF, thus a binding ELISA assay was conducted to detect the interaction of recombinant goat LTF and recombinant goat CLU. Briefly, LTF were diluted serially in PBS, with 0.01% BSA (pH 7.4). Duplicate samples of 100µL were then transferred to CLU-coated microtiter wells and incubated for 2h at 37℃. Wells were washed with PBST and incubated for 1h with anti-LTF pAb, then aspirated and washed 3 times. After incubation with HRP labelled secondary antibody, wells were aspirated and washed 3 times. With the addition of substrate solution, wells were incubated 15-25 minutes at 37℃. Finally, add 50µL stop solution to the wells and read at 450nm immediately. The binding activity of LTF and CLU was shown in Figure 1, and this effect was in a dose dependent manner.