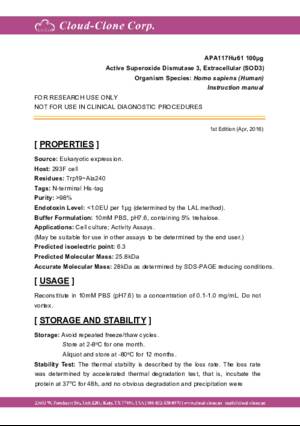 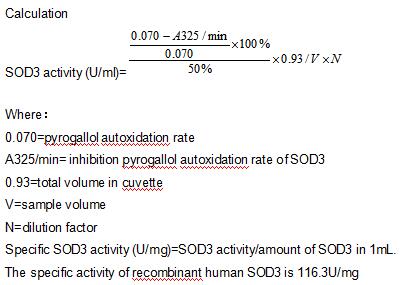 Extracellular superoxide dismutase [Cu-Zn] is an enzyme that in humans is encoded by the SOD3 gene. This gene encodes a member of the superoxide dismutase (SOD) protein family. SODs are antioxidant enzymes that catalyze the dismutation of two superoxide radicals into hydrogen peroxide and oxygen. Acroding to the report, in a weakly alkaline buffer solution (pH=8.2) with N-tris (hydroxymethyl) amino methane-HCL, pyrogallol can occur autoxidation in the air, then SOD can inhibit this reaction. Thus, we use this way to measure the activity of recombinant human SOD3. The reaction was performed in adding 30μL 50mmol/L pyrogallol to 900μL 50mmol/L Tris-HCl in 1.5ml cuvette (1.0cm light path), rapidly mixing at 25℃,then read at 325nm (zero the spectrophotometer using 50mmol/L Tris-HCl) , reacod the OD value every 30 second for 6 times. Control the pyrogallol autoxidation rate at 0.70 OD/min. After, adding various concentrations of recombinant of SOD3 to 900μL 50mmol/L Tris-HCl, incubated for 20min at 25℃, then adding 30μL 50mmol/L pyrogallol to each tube, rapidly mixing and read at 325nm, record the OD value every 30 second for 6 times. Under these conditions, the enzyme amount of 50% per minute inhibition of pyrogallol autooxidation is defined as a unit.