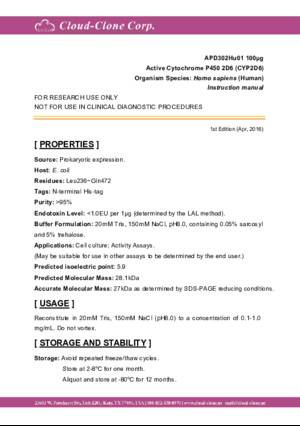 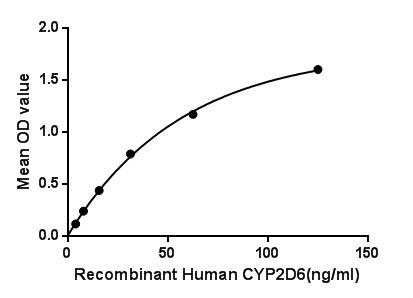 Figure. The binding activity of CYP2D6 with CPR.
Cytochrome P450 2D6 (CYP2D6), a member of the cytochrome P450 mixed-function oxidase system, is one of the most important enzymes involved in the metabolism of xenobiotics in the body. In particular, CYP2D6 is responsible for the metabolism and elimination of approximately 25% of clinically used drugs, via the addition or removal of certain functional groups-specifically, hydroxylation, demethylation, and dealkylation. CYP2D6 is primarily expressed in the liver. It is also highly expressed in areas of the central nervous system, including the substantia nigra. This enzyme also metabolizes several endogenous substances, such as hydroxytryptamines, neurosteroids, and both m-tyramine and p-tyramine which CYP2D6 metabolizes into dopamine in the brain and liver. Besides, Cytochrome P450 Reductase (CPR) has been identified as an interactor of CYP2D6, thus a binding ELISA assay was conducted to detect the interaction of recombinant human VDR and recombinant human CPR. Briefly, CYP2D6 were diluted serially in PBS, with 0.01% BSA (pH 7.4). Duplicate samples of 100uL were then transferred to CPR-coated microtiter wells and incubated for 2h at 37℃. Wells were washed with PBST and incubated for 1h with anti-CYP2D6 pAb, then aspirated and washed 3 times. After incubation with HRP labelled secondary antibody, wells were aspirated and washed 3 times. With the addition of substrate solution, wells were incubated 15-25 minutes at 37℃. Finally, add 50µL stop solution to the wells and read at 450nm immediately. The binding activity of CYP2D6 and CPR was shown in Figure 1, and this effect was in a dose dependent manner.