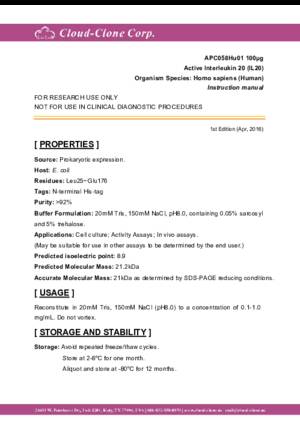 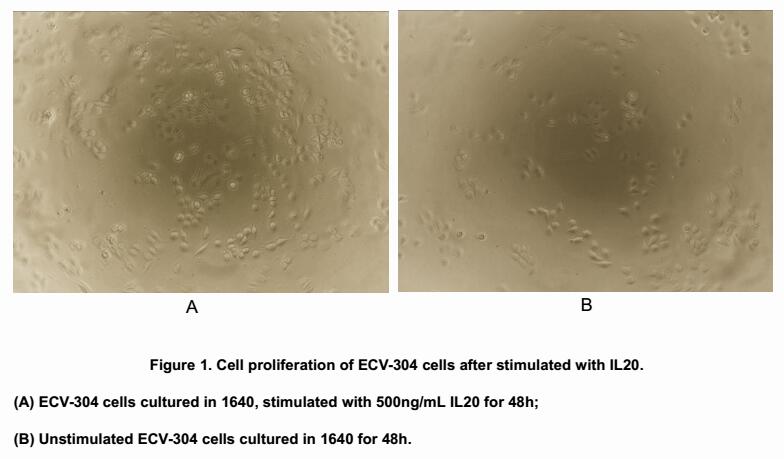 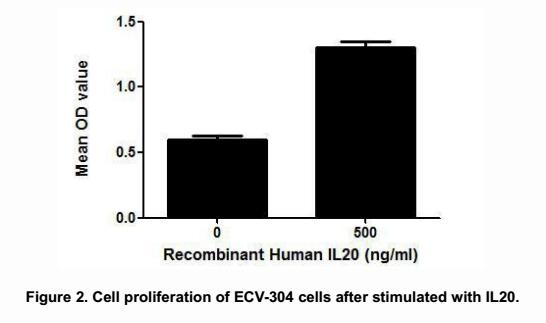 IL20 (Interleukin-20) is a cytokine structurally related to interleukin 10, which is produced by activated keratinocytes and monocytes. It is accepted that IL20 regulates proliferation and differentiation of keratinocytes during inflammation, particularly inflammation associated with the skin. Thus, proliferation assay of IL20 was conducted using ECV-304 cells. Briefly, ECV-304 cells were seeded into triplicate wells of 96-well plates at a density of 2,000 cells/well and allowed to attach overnight, then the medium was replaced with serum-free standard 1640 prior to the addition of various concentrations of IL20. After incubated for 48h, cells were observed by inverted microscope and cell proliferation was measured by Cell Counting Kit-8 (CCK-8). Briefly, 10µL of CCK-8 solution was added to each well of the plate, then the absorbance at 450nm was measured using a microplate reader after incubating the plate for 1-4 hours at 37°C. Proliferation of ECV-304 cells after incubation with IIL20 for 48h observed by inverted microscope was shown in Figure 1. Cell viability was assessed by CCK-8 (Cell Counting Kit-8 ) assay after incubation with human recombinant IL20 for 48h. The result was shown in Figure 2. It was obvious that human IL20 significantly decreased cell viability of ECV-304 cells.