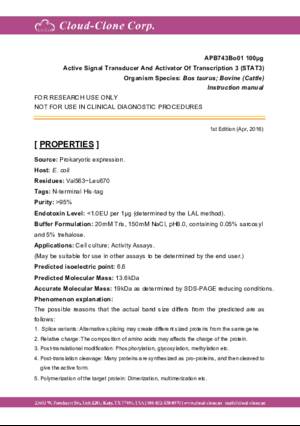 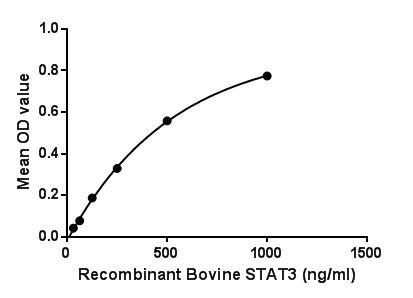 Signal transducer and activator of transcription 3 (STAT3) is a member of the STAT protein family. In response to cytokines and growth factors, STAT3 is phosphorylated by receptor-associated Janus kinases (JAK), form homo- or heterodimers, and translocate to the cell nucleus where they act as transcription activators. The protein can mediate the expression of a variety of genes in response to cell stimuli, and thus plays a key role in many cellular processes such as cell growth and apoptosis. STAT3 is essential for the differentiation of the TH17 helper T cells, which have been implicated in a variety of autoimmune diseases. Besides, Glucose 7 Phosphate Isomerase (GPI) has been identified as an interactor of STAT3, thus a binding ELISA assay was conducted to detect the interaction of recombinant bovine STAT3 and recombinant human GPI. Briefly, STAT3 were diluted serially in PBS, with 0.01% BSA (pH 7.4). Duplicate samples of 100μL were then transferred to GPI-coated microtiter wells and incubated for 2h at 37℃. Wells were washed with PBST and incubated for 1h with anti-STAT3 pAb, then aspirated and washed 3 times. After incubation with HRP labelled secondary antibody, wells were aspirated and washed 3 times. With the addition of substrate solution, wells were incubated 15-25 minutes at 37℃. Finally, add 50µL stop solution to the wells and read at 450nm immediately. The binding activity of STAT3 and GPI was shown in Figure 1, and this effect was in a dose dependent manner.
Figure. The binding activity of STAT3 with GPI.